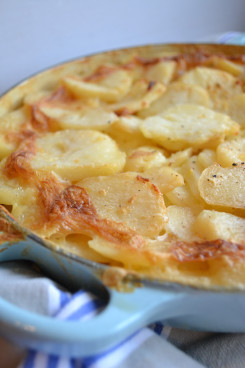 This is a really quick and easy way to make Dauphinoise.  I have tried the other method of using very thinly sliced raw potatoes but I find it just takes too long as you need to cook on a low temperature to avoid the starch curdling the cream.  By parboiling the potatoes first you avoid this and you can get fabulously creamy, garlicky potatoes in half the time. Also by heating the cream with the garlic, salt and pepper first you can check the seasoning before baking in the oven. Use waxy potatoes if possible as floury spuds will soak up all of the cream and become quite mushy.

Preheat the oven to 180ºC and lightly butter an ovenproof dish using a little bit of the butter.

Put the sliced potatoes in to a large pot of water and bring to the boil, allow to boil for 5 minutes and then drain thoroughly.  The potatoes should be just starting to cook around the edges but not be soft.

Put the cream, milk, garlic, salt and pepper in to a large pot and heat gently until hot but not boiling.  Dip your finger in and check the seasoning, you want it to be salty but not overpoweringly so  – remember that 2 teaspoons of coarse sea salt will be less salty than 2 teaspoons of fine table salt so if you are using table salt then I suggest you add in one teaspoon and taste before adding any more.

Dot the surface with the remaining butter and bake in the oven for 30-40 minutes, until the top is nice and golden and the potatoes are cooked right through.  I love to serve these potatoes with a simple steak or roast chicken.