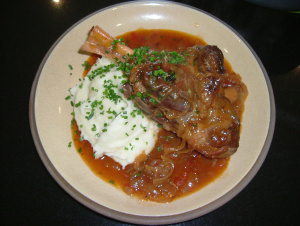 The last few days (okay, years) have been freezing here in the west of Ireland and yesterday, with the wind howling outside and rain pelting at the windows, I felt like we were still stuck in the depths of winter.  When the weather is like that it I always seek comfort in something hearty for dinner – there is nothing like knowing you have a big pot of stew on the hob or casserole in the oven to make you feel a little bit more cosy.  I tend to cook stews the day before for three reasons – firstly because they generally taste better when all of the ingredients have spent the night mingling together; secondly stews take hours of cooking and after a days work you don’t need to wait that long for dinner; and lastly letting the stew cool down allows any fat to solidify on the surface which makes it much easier to remove before heating up – greasy stew is not nice.   I had 4 rather large shanks – a bit bigger than I prefer but I won’t grumble about the butchers generosity – and they just about fit in my 28cm casserole.  I don’t ever flour the meat before browning – meat has to be browned on a high heat quickly (and without overloading the pan to avoid it steaming) and I find the flour burns and leaves a bitter black residue in the oil, so I tend to add it after the onions have been cooked and flavoured by all of the meaty bits left in the bottom of the pot.

Firstly heat the oil in your casserole/pot until it is quite hot and brown the shanks well –  they are an awkward shape so some parts won’t be as browned as others. 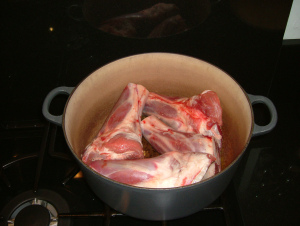 Remove the browned shanks from the pot and put to one side.  Turn down the heat to medium and add the finely sliced onions, celery, garlic and rosemary and turn in the oil to coat.  Cook until the onions are very soft – for about 10 minutes – and then add the flour and continue cooking and stirring for a further 2 minutes. 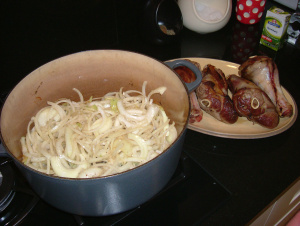 Add the balsamic vinegar and turn up the heat to a simmer, letting the balsamic thicken in the floury onions.  After approximately 3/4 minutes add the wine and again let it cook off for a couple of minutes.  Add the tomatoes and salt and pepper and then return the shanks to the pot and spoon some of the onions over.  Add enough water to almost cover them. 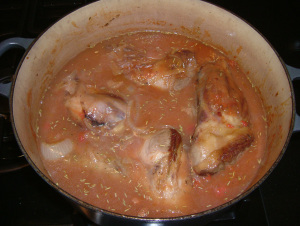 At this stage I cover my shanks with a cartouche (a circle of parchment or greaseproof paper) before putting on the lid – this helps prevent too much evaporation of the liquid and I think also helps keep the lid of your cast iron casserole from getting too stained!  Put the lid on and place in the oven for around 2.5/3 hours.    When heating up the next day leave the lid off and let the sauce reduce down to give  a thicker, richer sauce.  Check seasoning before serving.